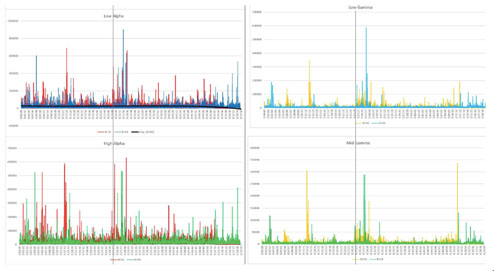 
The open office has been a central theme in contemporary workplaces, reasoned to provide flexibility, natural light, supervision, cost savings, transparency, democracy, and collaboration. While almost 70% of US workers occupy open plan or open seating settings (International Facility Management Association, 2010), this design strategy remains contentious (Kim & de Dear 2013). These settings may preclude privacy and concentration, evoke stress (Evans & Johnson 2000) or even influence attention or distraction. Indeed, there are many physical features of the workplace that may influence the neural processes involved in creative flow and innovative activities. These initial findings tested responses in a controlled yet ecologically relevant setting to investigate how sound may influence performance and creativity. Creativity was assessed using psychometric tests and creative tasks that have been reported in peer-reviewed publications (The Cambridge Handbook of Creativity, 2013). Frontal lobe electroencephalographic (EEG) brainwaves were recorded while consenting participants completed Alternative Uses (AU) tests, a creative product task, and post-test surveys. The test environment was in an office environment that was controlled to have no visual distractions and quiet conditions. During each test condition, different sound files were played (actual office noise, white noise, or classical music) were played at levels consistent with actual office environments (55-65 dBA). Creativity results were scored according to the published protocols that define creativity according to originality, elaboration, flexibility and fluency. Relative brainwave amplitude during each condition and during inter-test intervals were analyzed. The relationship between creativity scores and sound conditions were also analyzed.

IMPLICATIONS+APPLICATIONS:
Open workplaces are still a contentious issue in contemporary design. It is imperative we fully understand the environmental aspects of these spaces, including acoustic influences on the brain, mind, body, and behavior. The experiment’s progress and findings will add to the conversation of the impact and evolution of the open office workplace.