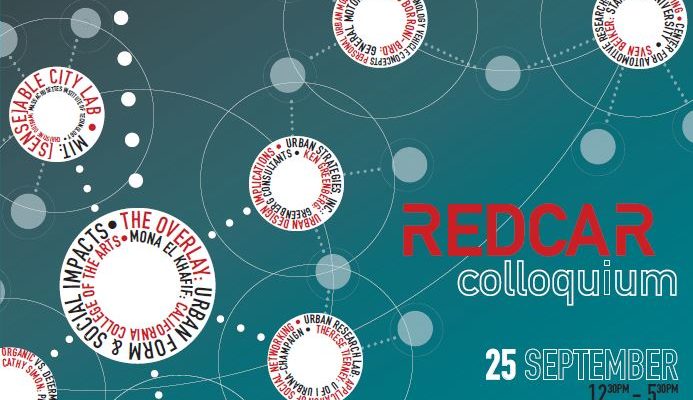 
The “LA REDCAR SF” project was realized as a colloquium as part of the San Francisco Chapter of the AIA “Architecture and The City Festival 2010” which rook place September, 2010, under the theme of “Investigating Urban Metabolisms.”

The colloquium, entitled “Rethinking Urban Transportation: New Strategies for Mobility,” was the first of its kind where a moderated discussion with panelists examined innovative transportation solutions in a systemic manner so as to address the reality of a typical North American polycentric metropolitan area that has been based mostly on a outdated, and unsustainable dependence on an petroleum driven economy, infrastructure, and planning of cities, suburban, and towns in the United States. Instead of examining solutions that apply to idealize (but non-existent) urban centers, this colloquium embraced the contemporary condition — the messy, chaotic, politically and socially balkanized, poly-centric metropolis. By exploring current technologies, as well as those which have reached a high degree of feasibility, this interdisciplinary colloquium explored the potential of an ubiquitous self-regulating system that can cope with and adapt to the unpredictability of a mobile society that moves away from dependence on the current paradigm of transportation systems. The output of this colloquium is to condense the discussion, audio, and video into a publication that can spur potential focus and discussion on the topic.

Many metropolitan areas continue to experience rapid growth, with some like Los Angeles receiving up to 500 new residents each day. One of the current challenges for expanding cities is the design of a flexible transportation infrastructure that can respond to an ever increasing demand on resources and systems; one that is contained within the vision of a socially equitable and sustainable society. This mode of infrastructural response necessitates a rethinking of traditional personal mobility strategies.

[1] Most mass transit systems are designed around a centralized urban core and do not address the emerging polycentric organization of contemporary North American cities.

[2] Suburban population dispersion over a wide geographic area, with resulting reduced densities, does not optimize a centralized transportation system.

[3] Traditional mass transit systems are predicated on a top-down “fit-the-user-to-the-technology” methodology, which ignores user preferences (i.e. autonomy) and usage patterns (omni-directional), requiring a culture-shift for users which can at best be hoped for, but in reality is seldom seen.

[4] Current ride sharing scenarios have limitations because firstly it can only accommodate one or two additional riders per one-car unit. Secondly, in our current cultural climate, sharing rides with strangers raises perceived safety issues amongst segments of the population.

Concepts to Be Examined

The intent of the colloquium is to examine innovative transportation solutions in a systemic manner so as to address the reality of a typical North American polycentric metropolitan area. Instead of examining solutions that apply to idealized (but non-existent) urban centers, this colloquium embraces the contemporary condition — the messy, chaotic, politically and socially balkanized, poly-centric metropolis. By exploring current technologies, as well as those which have reached a high degree of feasibility, this interdisciplinary colloquium will explore the potential of a ubiquitous self-regulating system that can cope with and adapt to the unpredictability of a mobile society.

To advance the evolution of personalized ubiquitous and autonomous transportation, the los angels REDCAR concept is used as a starting point (an alternative transportation proposal linking existing infrastructure with P2P communication) as an armature, bringing together the leading researchers for each of its hardware and software components within the context of a complete system. As an invisible extension of the physical and social realms, this can best be described as a singular opportunistic system, combining multiple processes and programs with a mobile embedded information technology platform that incorporates existing transit infrastructure elements (streets, freeways, bus, rail, METRO/BART), wireless/mesh communication networks, personal communication devices and social software. It builds on the inherent ‘autopia’ culture, by leveraging current social software, P2P and wireless technologies as a means of promoting identity and connectivity. The social networking application builds on similar applications already in use by FEDEX routing processes or amazon.com preferences, and similar to facebook, works through an AI profiling structure, linking friends, transport type and special interests. This system explores the possibility of a distributed transportation overlay utilizing existing street and freeway infrastructure, along with the P2P communications networks, to address the reality of a poly-centric metropolitan area such as Los Angeles or the San Francisco Bay Area, with the goal of reversing the current top-down “fit-the-user-to-the-technology” approach of traditional public transit.

The colloquium format encourages an open discussion amongst the panelists in two interrelated sessions, the first being the system technology and the second, the social and environmental overlay. We have listed a few questions for your consideration, as an introduction to the second session discussion, and invite the presenters from the first session to actively participate in the second:

What would such a ubiquitous system look like and what would it mean to have activity nodes emerge from user interests or social networks in contrast to current centers, which respond to fixed, centrally planned infrastructure?

If an activity or development area emerges organically in response to evolving and ever changing social patterns, what does that mean for urban planning and our sense of place?

Link to the Full Report