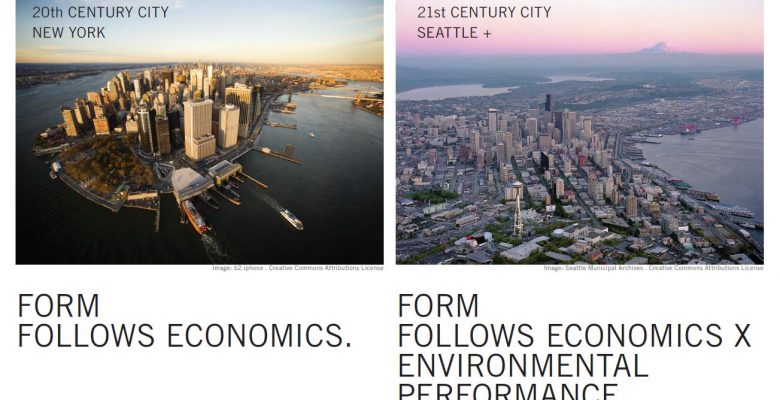 
Earth’s atmosphere reached a significant threshold of 400 ppm atmospheric carbon last year, swiftly moving upward, away from the historically more environmentally stable 350 ppm that many scientists believe is sustainable. Perkins+Will is working to address these issues nationally as a participant in the AIA 2030 Commitment and, locally here in Seattle, as member of the Seattle 2030 District, following on architect Edward Mazria’s 2030 Challenge initiative, to dramatically reduce carbon emissions from buildings.

The city of Seattle is uniquely poised as an environmental leader with a robust and innovative economy, talented and motivated design and engineering companies and a benign, temperate climate. To date, the Seattle 2030 District has made progress in emissions reduction with existing buildings (2030 Challenge for Planning), but new construction is rarely meeting the 2030 Challenge targets, instead simply following the legal minimum of Washington State Energy Code performance.

This project studies incentives for 2030 Challenge energy performance based on the existing City of Seattle Density Bonus Program. If carbon emission reduction is, as it appears, a public benefit, this program is perfectly suited to incentivize a new generation of leading edge, high performance buildings in a schedule progressing to a rigorous threshold of carbon neutral buildings by 2030. From a public benefit point of view, this program, if approved by the City Council and tuned in a way that makes it financially successful, can produce a higher density of the best energy performing buildings in the country.

Link to the Full Report