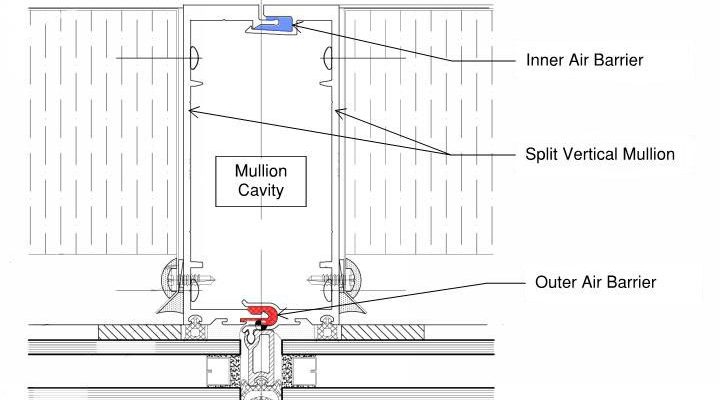 
Shadow boxes are commonly used in curtain wall construction, but can be problematic if not designed and detailed correctly and appropriately for the climate. Much has been written about shadow box design, both successes and failures, but there is no consensus about how, or if, the cavity should be vented. This article presents a literature review about shadow box design, and ventilating strategies. There are four approaches to ventilating the shadow box cavity: venting directly to the exterior environment, venting indirectly to the exterior through the mullion cavities; venting directly to the interior building environment and sealing the cavity. These approaches have been assessed for a temperate-to-cold climate, where the use of insulated glazing units (IGUs) are assumed for the vision light. Venting the cavity directly to either the exterior or the interior building environment introduces moisture- and particulate-laden air that can condense under certain climatic conditions and will likely deposit dust and debris on the interior surfaces of the cavity, creating both permanent and temporary aesthetic concerns. When venting to the exterior, exterior air can produce extreme hot or cold temperatures inside the cavity that is transferred to the surfaces of the surrounding mullions that are exposed to the building interior to detrimental effect. Sealing the cavity typically eliminates condensation and debris buildup, but the cavity can become overheated as in venting to the exterior. Additionally, there is some evidence that heat and pressure may build up to a point where it could damage the glass and degrade the sealants and coatings inside the cavity. After considering all of the options, indirect venting to the exterior appears to address most of the issues, but with the caveat that it is only feasible with certain unitized curtain wall systems. This approach vents the cavity into the vertical mullions, which ultimately connect to the exterior environment, but do so indirectly, relieving the heat and pressure but also tempering the exterior air that is allowed to enter.

This article originally appeared in Vol 10.02 of the Perkins+Will Research Journal. CLICK HERE to see the whole article.